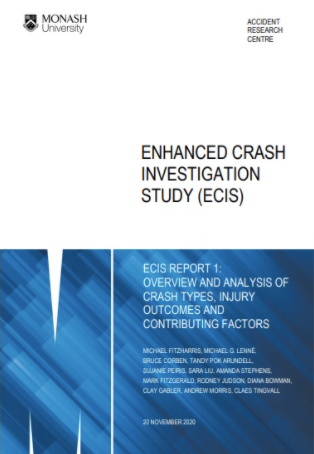 A study co-authored by Dr. Diana Bowman was released late November, revealing the major causes of injuries on Victorian roads. The Enhanced Crash Investigation Study (ECIS) examined over 400 seriously injured drivers, the factors and the severity of their crashes, all drawn from August 2014 to December 2016. The report, conducted by the Monash University Accident Research Centre (MUARC) and funded by the Transport Accident Commission (TAC), examined in forensic detail the factors of the crashes. Research nurses interviewed drivers and their families following their admission to the hospital and crash investigation teams inspected the scene of the crash and the vehicles involved.

The study found that those involved in the crashes were severely injured and needed extensive medical care, with the average number of days in hospital being 8.6, and 40% needing additional rehabilitation after being released.

MUARC Chief Investigator Associate Professor Michael Fitzharris discussed the factors that led to severe injury and pinpointed impact speed as one of the more significant reason of injury.

“Our research team saw first-hand the effects of high-speed crashes,” said Fitzharris. “The research also shows the limits and inability of vehicles to protect drivers from serious injury in high speed crashes. The need to create safe roads by matching speed limits to the road infrastructure is critical.”

In 45% of crashes, the study shows that the involved driver had no time to brake. For 55% of the crashes where the driver braked, they did so for 1.3 seconds on average. After examining over 180 possible contributing factors for the crashes, reconstructed using 3D software, the study found that exceeding the speed limit by just 3 km/h increased a driver’s crash risk by 25
per cent.

Speeding was the most common non-compliant behavior from drivers examined at around 26.2%, next being the presence of alcohol and drugs at 19.1% and disregarding traffic laws at 13.7%.

Other driver factors were found to have played a role in the crash, with medical conditions at 14.5%, and physical health and acute illness , 5.6%, were also seen to have contributed to crash occurrence.

Driver drowsiness was seen in 25 per cent of all crashes and was higher in run-off-road crashes. The study also found that mental health and psychological distress played a role in 12% of crashes occurring.

“Our findings show that the potential to reduce the number of drivers and passengers injured on Victorian roads is significant,” said Fitzharris. “Ultimately, with the right settings, the study shows that eliminating serious injury from crashes is possible. This is an important
finding of global significance.”

Check out more of the ECIS findings here.